You are using an out of date browser. It may not display this or other websites correctly.
You should upgrade or use an alternative browser.

If you are on the fence, jump! (New BPS w/SS Bubba's Barrel)

I've been researching UDS's and the BPS kit specifically for a few months on and off, trying to figure out if I had the time to source a drum and deal with the burn-out, drilling, and painting effort (and I'm in the city so the burn could be a problem). Finally decided that life is short and on the time vs. money spectrum I have less of the former, so I pulled the trigger.

Just got my Big Poppa Smokers kit + stainless drum from Bubba's Barrels. Arrived on Friday and I assembled Saturday morning... what a beauty! 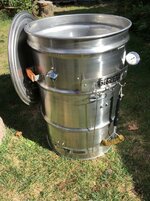 Misc feedback on the kit:

So... after assembly, I was planning to just do an initial seasoning burn, and loaded about 1/2 full basket of briquettes and filled a center well w/maybe a dozen from the weber chimney starter. After the bad smoke cleared in about 30mins, let it ride around 325 for a couple hrs and all was looking great. Took a peek and realizing there was still 1/2 of that 1/2 basket left, decided to go ahead and throw dinner on there - bone-in chicken breasts and some fresh brats. About 1.5hrs later the chicken was fantastic: 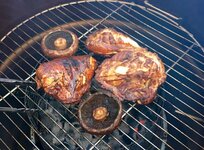 and I still had enough burn to do a round of vegetables (pepper + onion skewers, mushrooms, and asparagus). So I have no doubts that a full basket will last a good 8+ hrs at a lower burn (250F or so).


Today I stoked it up again w/a full basket. Took a good hour or so for me to get the temp dialed in around 250-275, but I'm sure I'll get the hang of it, and since then has been very steady. Ribs are underway, I'll post a followup on those and some more pics later.

So far I'm super happy with the drum, the BPS kit, and drum smoking in general. I'd like to thank Bubba's, BPS, and the drumsmoking.com community for all the help and insights as I kick off a new hobby/skill/obsession. I'm looking forward to stepping up the game and doing some brisket and pork shoulder soon!

Knolling the parts after wash: 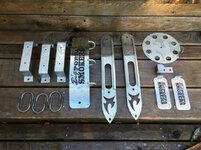 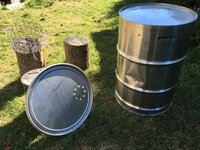 Last time it will look shiny on the inside: 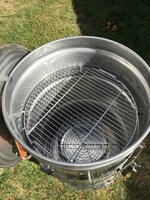 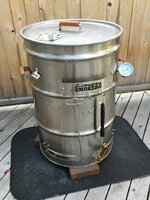 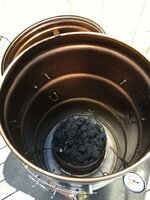 I did a rough 3-2-0.5, and they are falling off the bone massively, so a bit overcooked but waaaaaay better than my prior attempts on the Weber. And they taste fantastic, so... 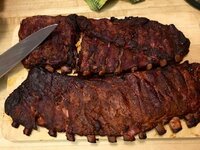 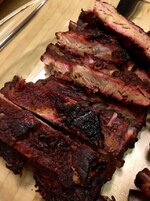 I love the look of that stainless! Will be my next one if I ever burn this one out!
S

Nice abitrandom! Re: your bottom vents if you decide to remove and re-shape them. Get a cylinder that's smaller than the barrel diameter(I used a scuba tank) and roll the vent back and forth a few times on the cylinder with a little pressure on the two ends to re-shape the curve to match the barrel, and then for the vent slider also. You can look down the edge of the vent just like you would a piece of wood, to see if there are any kinks in the curve and correct if needed. You can easily get a perfect fit for the curve of your barrel that way. When re-installing use high temp. silicone to bed the vent against the barrel for an air tight seal. The high temp. silicone is red and available at any auto parts store. Smoke on!
A

Thanks for the advice Salmonsmoker!
B